Each year, about four and a half million individuals are bitten by dogs, with one-fifth of those individuals requiring medical treatment for their injuries. When it comes to bite wound victims, children are the most common, with more than half under thirteen. Because of their tiny size and lack of knowledge about behaving around dogs. Children are much more likely than adults to maintain severe injuries from dog bites. How to Train A Chihuahua Not to Bite?

Most dog bites occur when people interact with familiar dogs. Highlighting the importance of educating people and their children on avoiding bite by a dog. We must recognize that any dog has the potential to bite and that by understanding the most common reasons why dogs bite. We can take steps to prevent them from happening.

Dogs bite for a variety of reasons

✔️ Dog Possessiveness Is a Contributing Factor to Dog Bites

Property protection is an ordinary concern, the “property” in context can refer to anything from a toy to food to a piece of land or an individual. Herding breeds and Guard Dogs are more likely than other breeds to engage in this behavior, but it can occur in some dog. Begin training as soon as possible to reduce this type of possessive behavior. Teaching children the “Leave it” command is an effective method of prohibiting toy aggression. Food aggression can evade by teaching your dog to wait patiently while placing their food on the table.

Instructions should be given on sitting or lying down and then removing their food and then replacing it. Approach the food bowl and sprinkle treats on top of the food. To help them understand that someone approaching the bowl is not bad. Children must understand not to disturb dogs eating or enjoying a treat such as a bone.

See also
Chihuahua Guide: How Strong is a Chihuahua Bite

✔️ Fear of dogs can result in dog bites.

When it comes to strangers, such as veterinarians and postal workers, or in unfamiliar situations, fear is most common to be felt. Never address a dog that you are unfamiliar with, and instruct children the same. At home, bites of fear can happen when a chihuahua is startle. Make sure your kids understand that it’s never okay to creep up on or bother a sleeping dog! Early socialization is critical for the young dog to expose to a wide variety of people, animals, and situations. Reducing the likelihood of developing a phobia. Take, for example, a simple social visit to the vet to get a feel for the clinic and meet the veterinarians. Placing some treats and a note in the mailbox with the request that your postal worker gives your puppy pleasure is a good idea.

✔️ Dog Bites Can Be Caused by Dog Pain.

Even amiable dogs can become aggressive when they are in pain. Instructions for your children should give if your dog has hip dysplasia, severe otitis, or any other type of chronic injury. The sore areas should avoid, and the dog should handle gently. If your dog becomes irritable for no apparent reason. Consider the possibility that they are in pain and schedule an appointment with your regular veterinarian for a physical examination.

✔️ Dog Bites Can Be Caused by Maternal Instincts

When a dog has puppies, even the most well-trained dog can turn into a biter. When you’re around a buck that has recently given birth, be aware of and respect her maternal instinct.

Children should instruct not to approach a young puppy near its mother, and adults should exercise caution when handling puppies. Ascertain that the mother and puppies have a haven to feel secure with the least possible distraction.

Another instinct to be aware of is the chasing instinct, which can activate by running or cycling past a dog after a dog being pursue. Remember to be mindful of your surroundings when jogging or cycling, and if you see a wandering dog, try to avoid crossing paths with it. The best thing to do is stop moving and stand tall before the dog whenever a dog approaches.

See also
When Can Chihuahua Puppies Get Their First Shots?

Keep an eye on the dog, but avoid making direct eye contact with it, as this may interpret as a challenge by the dog. After sniffing around you, they will eventually decide that you are uninteresting and move on to find something more interesting. If you are knocking over by a dog, curl up in a ball and protect your face, hands, and neck while remaining completely still. Set up a mock “stray dog” drill to teach children how to behave similarly.

Knowing the most common triggers that lead to dog bites will equip you with the knowledge you need to avoid these situations. It is always the case that a dog bite is precede by behavior that can used as a warning by a vigilant observer who can then take steps to reduce the dog’s stress or fear.

In most cases, their ears are pin back, the fur along their back may stand up. The whites of their eyes may be visible through the hair. While yawning is not an attempt on the part of the dog to appear carefree, it is an indication that their teeth are being displayed. It should discuss as a warning sign as well. Non-social “stand-offish” behavior such as freezing in responding to touch or look. Followed by direct intense eye connection back from the dog, is another telltale sign that he is likely to bite someone.

How to Train Your Chihuahua Not to Bite

There is no universal training technique that can use to prevent all Chihuahuas from biting simultaneously. Dogs bite for various reasons. The method used to stop this behavior varies depending on the cause of the behavior. The following suggestions can help significantly reduce the number of biting and other forms of aggression in Chihuahuas.

📍Do not punish for growling

Many Chihuahua owners scold or otherwise punish their dogs if they growl at them. They do so to eliminate a critical warning sign that occurs before biting. Your Chihuahua may bite without warning the next time he is provoke if you teach him that growling is terrible behavior. Even though the possibility of being bitten remains, the warning sign — growling — has eliminate.

It may seem counter-intuitive to allow your Chihuahua to growl while teaching him not to bite, but it positively affects your training efforts. Owners can train their children to back away from him when he growls to avoid being bitten by their Chihuahua.

His growling may also reveal the reason for his aggression. If your Chihuahua growls when you pick him up, he may be suffering from a painful injury or medical condition. If he barks when another pet approaches his crate, this indicates that he is territorial in his aggression.

During nursing and playing with their littermates, puppies learn bite inhibition at a young age. Occasionally, if a puppy bites one of his littermates too hard, the other littermate will let out a high-pitched yelp, which means “You bit me too hard — and it hurt!” In the same way, biting the mother too hard while nursing can cause her to get up and walk away from the puppy. If a puppy intends to play and nurse, he must first learn to control his bite and mouth.

See also
Why are Chihuahuas Mean?

The fact that puppies should remain with their mother for at least eight weeks is one of the reasons for this. If a puppy is remove from the home too soon, he will have less opportunity to develop bite inhibition through play and nursing. Similarly, singletons who are born without playmates face the same challenges.

When it comes to teaching bite inhibition, there are three rules to remember:

If chihuahuas are not socialize early on, they are much more likely to exhibit aggressive behavior later on. The lack of exposure to other people, animals, and environments increases the likelihood of the Chihuahua developing fear-induced aggression, such as biting the hand of an unfamiliar person.

Several studies conducted by researchers from the Cummings School of Veterinary Medicine at Tufts University have found that unsocialized puppies are 580 times more likely than socialized puppies to develop aggression problems in later life.

When socializing your Chihuahua, the following are some guidelines to follow:

Chihuahuas that have spay or neuter may be less aggressive. An investigation by researchers from the University of California found that neutering reduced intermale aggression in 60 percent of male dogs, with 25 percent experiencing a rapid reduction in attack and the remaining 35 percent experiencing a gradual decrease in charge.

Neutering results in lower testosterone levels, which in turn reduces the behavior associated with this hormone, such as urinating to mark territory, hyperactivity, fleeing, and aggression, among other things.

Spaying a female Chihuahua prevents her from going into heat, and, as a result, the behaviors associate with being in heat are eliminate. It may also positively impact female hormone-driven behavior, such as nest guarding during a false pregnancy.

See also
My Chihuahua Smell Like Fish: What Could Be the Cause?

By being a responsible dog owner, you can start preventing dog bites right at home with your pet. If you do not purpose to breed your dog, having them spay or neuter will help reduce the likelihood of bite-relate behaviors.

It is essential to engage in regular physical activity and play with your dog to strengthen the human-animal bond and to consume excess power that could otherwise direct towards anxious energy. Do not, however, engage in aggressive games such as wrestling or tug-of-war, which can lead to issues of dominance. Train your dog thoroughly; they should be familiar with the fundamental commands such as sit, stay, come, and leave. Allowing your dog to roam free in an area where they may threaten other people is not recommend.

Please make an effort to socialize your dog and expose him to various people and situations, but avoid overburdening him with too much information. Maintain your vaccination status in preparation for the worst-case scenario.

If a dog hurts someone and is not update on its vaccinations, the dog can be put to death in most states. If your dog shows any indications of aggression, you should seek professional assistance from your veterinarian. In case you have children, spend the time necessary to educate them on how to behave around dogs, what to observe out for, and what to act if a dog attacks them.

Want to know How to Groom a Chihuahua – 5 Easy Steps!? We got you covered, read for more! 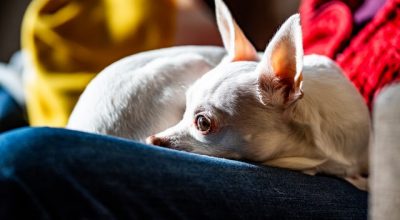